What Is Burning Man?

Who are we, some may say, to answer the question what is Burning Man? After all, as virgin ‘Burners’ one veteran barely give us the time of day, let alone the chance to answer such a deep and meaningful question. Is there snobbery from older burners to the new school? Maybe a touch, but the majority of veteran campaigners greet newbies with a smile, not a sneer.

Entering the unknown can be a little daunting for the first time but it’s very easy to get into the swing of things. Firstly, you need an open mind. If the thought of a middle-aged man’s rainbow painted sausage is enough to put you off your oatmeal, then maybe it’s best you stick to Coachella or V Festival. On the flip side, if the sight of a naked 6ft Russian model walking around with nothing but an umbrella to hide her modesty turns you into a rabid dog, then you should also stay away. Burning Man is for everyone, bi, trans, gay, straight and everything in between. That’s the essence of its beauty. Nobody is looked down upon for what they are. 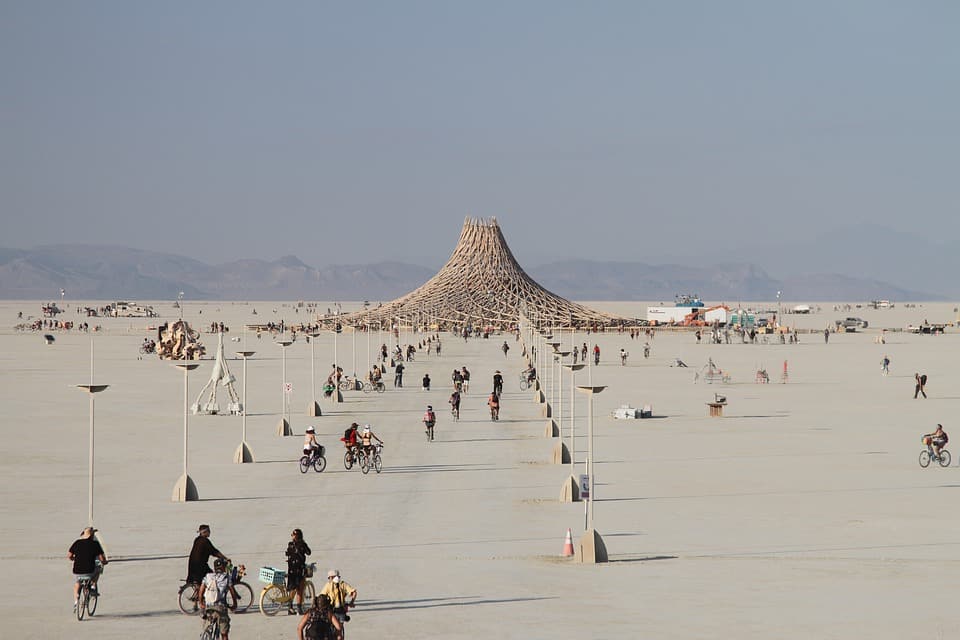 The sense of being ‘in it together’ really is the most powerful part of the Burning Man experience. Conditions are tough, water is at a premium and people really do go out of their way to help each other. It’s kind of what we would imagine the first Summer of Love was like, but held every year in the Nevada desert. It’s certainly without question one of the friendliest places on earth, with people instantly pitching in to help fix a tent, feed a mouth or offer a shoulder to cry on. This is something that certainly happens at the main temple, but more about that later.

Tell me another place on the planet that you can go out without a wallet and have a big night out for free whilst listening to Carl Cox, Seth Troxler, Craig Richards and Jamie Jones? All you need is a cup, a big smile and an open heart. That may sound slightly romanticised, but these are the simple facts folks.

We have so far been out for three nights on the trot without a wallet between us. Sounds crazy but that in a nutshell is what Burning Man is all about. It’s totally unique, magnificently life affirming and absolutely brilliant. All of the top level international DJs play, while the infamous Robot Heart sound system costs a reported $2.5million to run each year. Its ‘donators’ pay this for people to enjoy for free. In a world of such corporate domination and financial raping of every known resource on the planet, it’s crazy to thing that something like this exists in America.

We really feel that this party could only be held in the USA, as it’s something of a two-fingered salute to the powers that be. Life doesn’t have to be based around greed and money. Burning Man is proof of what can be achieved if everyone offers their time and energy for free for the greater good. Though people travel from all over the planet to attend, the backbone of Burning Man is the people of America. This is their week to be free and be exactly who they want to be. To live a different life to the one that is forced on them due to financial necessity and government regulations.

Is it a hippy free for all? Not quite, but the ethos is definitely there. Is it a celebration of the human spirit and a way to bring strangers closer together though a totally unique bonding experience? Absolutely.

In times of trouble, the human race’s natural instinct is to help their fellow man out of the dirt, not allow them to flounder. Burning Man brings together a divided nation in the quest for unity in an amazing amphitheater of colour and imagination. A celebration of being alive in its truest form. The fact that the best DJs in the world happen to provide the soundtrack, well that’s just an added bonus.

What To Expect At Burning Man

What You Need At Burning Man